Perl supports various tests for file and directory states. Most are identical to their bash test siblings, but some additional are supported, like -M, -A and -C. 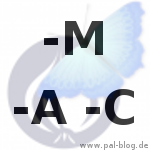 Perl is great. I'm working with it for 16 years - but still discover something new from time to time. Today, I stumbled into the MAC tests while browsing the perlvar documentation page for something completly different. I wanted to quick check $^T before using it (yes, sometime I also look up basic default variables before using them and I was right to do so, because I mixed up $^S (which might have been start time, but isn't) with $^T which is the (unix)Timestamp recoded at the start of the script).

I suddenly noticed, that $^T was referring to three one-letter-tests I didn't know. But as long as perlfunc is available, help is not far away:

I did some (persistent) scripts lately which are checking for updated modules they're using, but I

b) didn't ever think that special Perl tests might exist for this usage case.

But Perl is TIMTOWTDI and now I know at least three of them to check if a - for example - Gearman worker process should restart itself to reload changed modules. The shortest might be:

(Which doesn't cover the script itself, but all loaded modules.)

Here is a commented version of the same line: