I wrote about the first day of YAPC::EU 2012 yesterday and told you that the weather was really hot. Today is much cooler, only slightly above 30°C outside but in a building... without air conditioning... but with >400 people... you don't wanna know now.

YAPC itself was great today even if I missed some talks because they ran at the same time in different tracks. I didn't enjoy the joy of breaking stuffbut it must have been fun as people told me. I really hope that the talk has been recorded and will be online not far away.

Curtis Poe introduced his concept of an agile company in the introduction key note talk and I agree to most of what he said, but don't know if developers are the right audience for this topic, maybe all our CEOs and CTOs should hear it.

Bringing Perl to a Younger Generation‎ disappointed me a little bit because I expected some useful tips on that topic but it was mainly a report on the Perl foundations Google Code-Inprocess and plans. Nice to hear and maybe I'll try to get involved into the next round.

Leon Brocard's Fallacies of Distributed Computingwas really great as he addressed some of the biggest myths of distributed computing.‎

I really liked the continuous deployment talk yesterday and the slides are online now. A good candidate for the list of talks I'm planning to introduce to the other developers at my company. 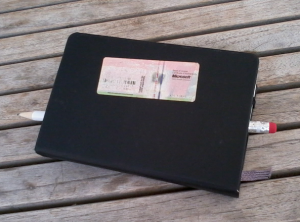 We had a great social event yesterday and today we're sitting at the Extrablatt enjoying some drinks sponsored by booking.com. You know, the guys who sell book-ink or not? I was thinking about the photo of the day and just discovered the smallest notebook with windows on it and it doesn't ever have any battery problems.